Reviews on books and the occasional movie.

Granny Weatherwax and Nanny Ogg, the Discworld’s greatest witches, are back for an innocent night at the opera. Naturally there’s going to be trouble, but at the same time there’ll be a good evening’s entertainment with murders that you can really hum to.
END_OF_DOCUMENT_TOKEN_TO_BE_REPLACED

‘If you go on eating like that you’ll turn into a real Fattypuff,’ thin Mr Double said to his plump son Edmund. He was right, for when Edmund and Terry found the secret staircase in the wood which led to the underground countries, Edmund had to go with the Fattypuffs to their city, where people were huge and happy and ate all day long, while Terry went off with the Thinifers, who were as spiky and prickly as their city. And it took a war as well as a lot of argument before the boys could teach them to agree about anything.
END_OF_DOCUMENT_TOKEN_TO_BE_REPLACED

#1 New York Times bestseller Nicholas Sparks turns his unrivaled talents to a new tale about love found and lost, and the choices we hope we’ll never have to make.

Travis Parker has everything a man could want: a good job, loyal friends, even a waterfront home in small-town North Carolina. In full pursuit of the good life – boating, swimming , and regular barbecues with his good-natured buddies — he holds the vague conviction that a serious relationship with a woman would only cramp his style. That is, until Gabby Holland moves in next door. Spanning the eventful years of young love, marriage and family, THE CHOICE ultimately confronts us with the most heartwrenching question of all: how far would you go to keep the hope of love alive?
END_OF_DOCUMENT_TOKEN_TO_BE_REPLACED

The Lightning Thief
(Percy Jackson and the Olympians #1) 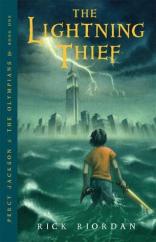 Percy Jackson is a good kid, but he can’t seem to focus on his schoolwork or control his temper. And lately, being away at boarding school is only getting worse—Percy could have sworn his pre-algebra teacher turned into a monster and tried to kill him. When Percy’s mom finds out, she knows it’s time that he knew the truth about where he came from, and that he go to the one place he’ll be safe. She sends Percy to Camp Half Blood, a summer camp for demigods (on Long Island), where he learns that the father he never knew is Poseidon, God of the Sea. Soon a mystery unfolds and together with his friends—one a satyr and the other the demigod daughter of Athena—Percy sets out on a quest across the United States to reach the gates of the Underworld (located in a recording studio in Hollywood) and prevent a catastrophic war between the gods.
END_OF_DOCUMENT_TOKEN_TO_BE_REPLACED

When to Rob a Bank

In celebration of the 10th anniversary of the landmark book Freakonomics comes this curated collection from the most readable economics blog in the universe. It’s the perfect solution for the millions of readers who love all things Freakonomics. Surprising and erudite, eloquent and witty, When to Rob a Bank demonstrates the brilliance that has made the Freakonomics guys an international sensation, with more than 7 million books sold in 40 languages, and 150 million downloads of their Freakonomics Radio podcast.

When Freakonomics was first published, the authors started a blog—and they’ve kept it up. The writing is more casual, more personal, even more outlandish than in their books. In When to Rob a Bank, they ask a host of typically off-center questions: Why don’t flight attendants get tipped? If you were a terrorist, how would you attack? And why does KFC always run out of fried chicken?

Over the past decade, Steven D. Levitt and Stephen J. Dubner have published more than 8,000 blog posts on Freakonomics.com. Many of them, they freely admit, were rubbish. But now they’ve gone through and picked the best of the best. You’ll discover what people lie about, and why; the best way to cut gun deaths; why it might be time for a sex tax; and, yes, when to rob a bank. (Short answer: never; the ROI is terrible.) You’ll also learn a great deal about Levitt and Dubner’s own quirks and passions, from gambling and golf to backgammon and the abolition of the penny.

Steven D. Levitt, a professor of economics at the University of Chicago, was awarded the John Bates Clark medal, given to the most influential American economist under forty. He is also a founder of The Greatest Good, which applies Freakonomics-style thinking to business and philanthropy.

Stephen J. Dubner is an award-winning author, journalist, and radio and TV personality. He quit his first career—as an almost-rock-star—to become a writer. He has since taught English at Columbia, worked for The New York Times and published three non-Freakonomics books.
END_OF_DOCUMENT_TOKEN_TO_BE_REPLACED

Pirriwee Public’s annual school Trivia Night has ended in a shocking riot. One parent is dead. The school principal is horrified. As police investigate what appears to have been a tragic accident, signs begin to indicate that this devastating death might have been cold-blooded murder.

In this thought-provoking novel, number-one New York Times best-selling author Liane Moriarty deftly explores the reality of parenting and playground politics, ex-husbands and ex-wives, and fractured families. And in her pitch-perfect way, she shows us the truth about what really goes on behind closed suburban doors.

END_OF_DOCUMENT_TOKEN_TO_BE_REPLACED

It seemed a harmless game–until she found out who he really was.

Charity Ames is trapped into a lie and she hates it. She needs a man to pretend to be her husband for a few days–so she hires one. Expecting a gargoyle, she’s amazed when he turns out to be a very appealing hunk.

Ross wants something Charity has, so when he gets the chance to pretend to be her husband, he takes it. But Charity is not the brittle business woman he expects and he falls hard and fast for her barefoot, South Seas image. Trouble is, it’s an image she’s trying to deep six, and she can’t really believe a man from a prominent family like his–and with a terrifying mother like he’s got — would want anything to do with a girl of her shady past.

Original published in print by SILHOUETTE DESIRE and recently revised as part of the Destiny Bay Series….

Do you want to dump your dog because he tries to escape your yard? Barks too much? You-know-whats in the house? Doesn t play well with others? Chewed up your favorite pair of shoes? You wouldn t be the first person asking to return your pet. And dog rescuer Randy Grim has heard every reason under the sun. But before you load Fido into the back of your car, read this book. In it, Randy addresses the concerns of dog guardians everywhere by responding to letters that he ‘s actually received. With humor, and from his vast experiences with abandoned dogs, he reveals exactly what you can do to remain calm and fix every bad behavior problem. (Even if it means dumping your husband instead of the dog.)
END_OF_DOCUMENT_TOKEN_TO_BE_REPLACED

Princess Eadlyn has grown up hearing endless stories about how her mother and father met. Twenty years ago, America Singer entered the Selection and won the heart of Prince Maxon—and they lived happily ever after. Eadlyn has always found their fairy-tale story romantic, but she has no interest in trying to repeat it. If it were up to her, she’d put off marriage for as long as possible.

But a princess’s life is never entirely her own, and Eadlyn can’t escape her very own Selection—no matter how fervently she protests.

Eadlyn doesn’t expect her story to end in romance. But as the competition begins, one entry may just capture Eadlyn’s heart, showing her all the possibilities that lie in front of her . . . and proving that finding her own happily ever after isn’t as impossible as she’s always thought.