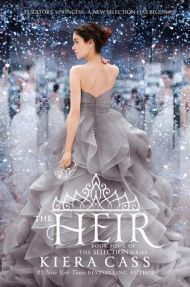 Princess Eadlyn has grown up hearing endless stories about how her mother and father met. Twenty years ago, America Singer entered the Selection and won the heart of Prince Maxon—and they lived happily ever after. Eadlyn has always found their fairy-tale story romantic, but she has no interest in trying to repeat it. If it were up to her, she’d put off marriage for as long as possible.

But a princess’s life is never entirely her own, and Eadlyn can’t escape her very own Selection—no matter how fervently she protests.

Eadlyn doesn’t expect her story to end in romance. But as the competition begins, one entry may just capture Eadlyn’s heart, showing her all the possibilities that lie in front of her . . . and proving that finding her own happily ever after isn’t as impossible as she’s always thought.

Why I Chose the Book

The Selection! Cass did an amazing job with the styling of her book covers because I could tell this was hers from across Barnes and Noble. I fought with myself over buying the hardcover, picking it up and putting it back several times before I used one of my Audible credits to buy it. I just couldn’t justify spending another $20 on a book when I could get it for “free.”

It took me longer than I care to admit to connect the names from the first trilogy to the characters in the second. I didn’t remember America’s sisters and I was used to Ledger being called by his first name. That said, I wouldn’t have changed a thing because Eadlyn has a different relationship with them than America did.

I’m 94% sure I know who Eadlyn ends up with. As soon as the character came up, I thought “You.” I was sure, but there is one other character taking up that other 6% only because it would be a very unexpected twist. I’ll tell you at the very end only because I want it in writing that I knew all along. 😉

No! It’s another trilogy! I thought it was an encore! I specifically waited to read the second book until the third was out so that there wouldn’t be a cliffhanger and now I have to wait for two more books to be written. It’s a very love-hate thing I have for Cass right now. On a side note, I’m planning wall art and cosplay around the book cover ballgowns.

When I first reviewed The Selection, I compared it to the secret love child of The Bachelor (TV show) and The Hunger Games. This was a little more Bachelorette and pretty much no Hunger Games. I’m not sure if it was intentional, but Cass even used some of the same terminology. The boys asked for “group dates,” and the photographers seemed more prominent in this book.

I must admit, I was a little shocked America and Maxon raised such a brat. I’m trying to give her the benefit of the doubt–you can’t have a YA coming of age story if they don’t start out immature; there has to be somewhere for them to go. She’s just taking longer than I would like. Her internal monologues and concerns rarely changed. Somehow even though America took three books to make up her mind between two suitors, I don’t recall it being repetitive. Maybe I related more to her dilemma than Edalyns? I also liked America as a person far more than I like Edalyn so far.

While some parts seemed repetitive or dragged, the ending compensated. My mom will not be proud of this admission, but I yelled, “oh shit!” at one point. The blood drained from my face as I hit the realization of what happened a touch ahead of Eadlyn.

How important is it to have a life partner?

I’ve never been someone who needs a husband. I want a husband though. I have some strong female role models who never married, so I didn’t grow up thinking that life is incomplete without a life partner. However, for me personally, especially in the last year, I’ve realized how much having a significant other changes you. There are compromises and sacrifices unique to a romantic relationship compared to those you make for friends and family. Being in a relationship with my current boyfriend has made me a more considerate person. He’s taught me balance, brought me out of my shell, and honestly made me a better person. Even though I am skeptical of the conclusion Edalyn made at the end of the book, reflecting on my own life has given me an interesting perspective.

Despite the wait ahead, I look forward to the continuation of The Selection series.

Start with the first three. I think the intent is to allow you to read four with no knowledge of what happened before because aside from America and Maxon being married and another detail I won’t ruin, there was very little carry over. It’s possible to do it that way, but I strongly recommend starting with The Selection.

I feel the need to clarify since the review was mostly positive. I didn’t see much growth from Edalyn through the novel. Her internal thoughts and fears were primarily consistent from page 1 to the end. Though she altered her behavior some, I was less than impressed. I think the next two will be better; this one just didn’t stand up to the first three.

Kyle is the one I was sure Edalyn would end up with until Eric entered the picture. We’ll see at the end of book 6 if I’m right.

To see what other books we’ve reviewed, check out our book reviews page.