Harry Dresden is a wizard. In the yellow pages, paranormal investigations, consulting, the whole nine-yards, publicly practicing wizard. “Normal” people mock him and the White Council has him on their watch list. He’s broke and technology likes to malfunction around him; the more modern an object, the more likely it is to jam. He’s not athletic, but he’s become well acquainted with stairs in order to avoid using the elevator.

When someone breaks the first rule of magic, “Thou Shall Not Kill Using Magic,” Dresden is blamed, the White Council is likely to vote a death sentence, and Dresden has less than 48 hours before he becomes the next victim.

END_OF_DOCUMENT_TOKEN_TO_BE_REPLACED

Vivid descriptions that will haunt your dreams. Without being too gory, Deaver manages to paint horrifying pictures. To those of you who know Deaver in person, be careful not to piss him off. His methods of killing people (in XO) are creative and disturbing. The amount of effort put into this publication is astounding. I’ve seen authors create jewelry from their books, Ermisenda and I have created t-shirts, and some authors have created playlists, but XO has had a singer record all of the main character’s songs. Supposedly, Deaver has even hidden clues in the music. I haven’t listened to them except the main song which you can download for free. Beautiful vocals, but wasn’t interested in the full collection. But enough about that, back to the book!

Deaver sets his heroine Kathryn Dance on a quest to stop an obsessive stalker from destroying a beautiful young country singer.     Kayleigh Towne is gorgeous with a voice that is taking her to the heights of the country pop charts. Her hit single “Your Shadow” puts her happily in the spotlight, until an innocent exchange with one of her fans leads Kayleigh into a dark and terrifying realm. The fan warns, “I’m coming for you,” and soon accidents happen and people close to Kayleigh die. Special Agent Kathryn Dance must use her considerable skills at investigation and body language analysis to stop the stalker—but before long she learns that, like many celebrities, Kayleigh has more than just one fan with a mission. A former folksinger, Deaver has written the actual song, “Your Shadow.” Readers will be able to download it from his website, JefferyDeaver.com. END_OF_DOCUMENT_TOKEN_TO_BE_REPLACED

Interested in reading Poisoned Waters? You can grab a copy for free HERE from Amazon. It will be free for 15th, today (12:00AM PST time), and tomorrow the 16th.

If you don’t have a Kindle, you can still read it by downloading the free Kindle for PC app on Amazon.  You can also support us even if you’re not interested in the book by downloading Poisoned Waters and helping us rise through the ranks.

Thanks for all of your support and being a part of our community. 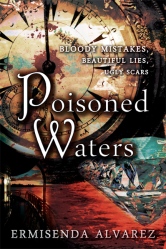 Poisoned Waters is a thrilling mystery set on a trans-Atlantic cruise where a murderer walks amongst passengers. 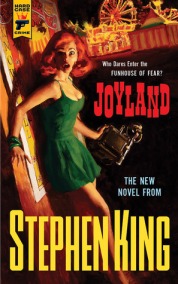 Joyland is a whodunit noir crime novel and a haunting ghost story set in the world of an amusement park.

It tells the story of the summer in which college student Devin Jones comes to work as a ‘carny’ in small-town North Carolina and has to confront the legacy of a vicious murder, the fate of a dying child, and the way both will change his life forever. It is also a wonderful coming-of-age novel about friendship, loss, and your first heartbreak. Who dares enter the funhouse of fear?

Since this was Stephen King, I knew there was going to be a lot of hype. I’ve read only Misery which I enjoyed. But I have always wanted to go back and read more. After all, he is a famous writer. This book, in my opinion, was over-hyped. END_OF_DOCUMENT_TOKEN_TO_BE_REPLACED

Helen Gardener is murdered on a trans-Atlantic cruise. The Diamond Royale sails from Southampton to New York with her murderer aboard. Set in the 1950s, Poisoned Waters follows the stories of seven unfortunate characters and how they are affected by her death. Was it merely an accident? Mr Phillips, the owner of the ship, and sponsor of the cruise, rules with an iron fist, in search of something or someone.

Lies spiral out of control as the suspects try to survive the final days on board. Conflicted by their sense of morals, greed, and lust, they realise what kind of people they really are. Who will rise? Who will fall? Who was Helen’s murderer?

END_OF_DOCUMENT_TOKEN_TO_BE_REPLACED

Hey, everyone! It’s Ermisenda here. In the background I have not only been working on the second novel in the Blind Sight series, but I have written a new book. It’s a thriller/suspense/mystery book with elements of crime.

Here is the synopsis for Poisoned Waters:

Helen Gardener is murdered on a trans-Atlantic cruise. The Diamond Royale sails from Southampton to New York with her murderer aboard. Set in the 1950s, Poisoned Waters follows the stories of seven unfortunate characters and how they are affected by her death. Was it merely an accident? Mr Phillips, the owner of the ship, and sponsor of the cruise, rules with an iron fist, in search of something or someone.

Lies spiral out of control as the suspects try to survive the final days on board. Conflicted by their sense of morals, greed, and lust, they realise what kind of people they really are. Who will rise? Who will fall? Who was Helen’s murderer?

Does it sound like a book that would interest you? Well, Ermisenda on behalf of Ermilia, LLC is launching a tour for it’s release in August, 2013. Poisoned Waters is already on Goodreads for you to mark to-read!

Anyone who would like to be a beta reader and post an excerpt/and or review in the first week of August is welcome to. Leave a comment with a way to contact you (preferably email) and I can send you the details and a copy in your preferred format. END_OF_DOCUMENT_TOKEN_TO_BE_REPLACED

Action-packed and suspenseful. An easy 4.5 out of 5 stars!

Enter a world where nothing is what it seems. Where your closest friend could be your greatest enemy.

Kevin Parson is alone in his car when his cell phone rings. A man calling himself Slater offers a deadly ultimatum: “You have exactly three minutes to confess your sin to the world. Refuse, and the car you’re driving will blow sky high.” Then the phone goes dead.

Kevin panics. Who would make such a demand? What sin? Yet not sure what else to do, Kevin swerves into a parking lot and runs from his car. Just in case.

Precisely three minutes later, a massive explosion sets his world on a collision course with madness. And that’s only the first move in this deadly game.

From the #1 best-selling fiction author comes a powerful story of good, evil, and all that lies between.

I read this book many months ago but I still want to write a review on it. It was one of those novels that I picked up to read, not knowing much about it nor expecting a lot. I wasn’t able to let go of the novel and I ended up finishing it within 48 hours. END_OF_DOCUMENT_TOKEN_TO_BE_REPLACED

I have created some more free book covers! END_OF_DOCUMENT_TOKEN_TO_BE_REPLACED

Goosebumps, tears, Alex Cross, Run was so well written that as soon as I finished the last CD, I put the first one back in to get a full appreciation of the complex interwoven plots. I didn’t realize it was part of a series until I looked it up to grab the synopsis. James Patterson does an excellent job giving a full story even at #20 in the series.

DON’T LOOK, ALEX CROSS
Top plastic surgeon Elijah Creem is renowned for his skills in the operating room, and for his wild, no-expense-spared “industry parties,” bringing in underage exotic dancers and models for nights of drugs, champagne, and uninhibited sex. That is, until Detective Alex Cross busts one of Creem’s lavish soirees and ruins his fun. Now Creem is willing to do anything to avoid going to jail.

DON’T THINK, ALEX CROSS
But Alex doesn’t have time to dwell on that case. A beautiful woman has been found murdered in her car, a lock of her hair viciously ripped off. Then a second woman is found hanging from a sixth-floor window with a brutal scar slashed across her stomach. When a third mutilated body is discovered, rumors of three serial killers on the loose send Washington D.C. into an all-out frenzy.

JUST RUN
Alex is under so much pressure to solve these three grim cases that he hasn’t noticed that someone else investigating him-someone so obsessed and so twisted that they’ll do anything-ANYTHING- to get the vengeance they require. Alex Cross, Run is James Patterson’s most unrelenting story yet-a white-hot, sensational thrill ride with the most extreme and gripping characters Patterson has ever brought to life.

END_OF_DOCUMENT_TOKEN_TO_BE_REPLACED

A classic race against time novel! Find out why I gave it 3 out of 5 stars!

Something terrible has happened in Four Corners, and the complete absence of life and severed phone lines in every building make it impossible to get help. Grace, her senses honed by a lifetime of justifiable paranoia, sees the sinister in every detail, and her intuition barely saves all three of them when they witness a horrifying double murder. Grace, Annie, and Sharon are suddenly running for their lives, while the rest of the Monkeewrench crew, along with Minneapolis cops Leo Magozzi and Gino Rolseth, strike out on a blind search to find them.

I picked this novel up for $1 from a second-hand book sale. I took it with me to read on the plan to Europe. I read it a month or two ago but forgot to review it. There’s a reason why…