An urban fantasy story with a few twists up its sleeve. Find out why I gave it 4 out of 5 stars!

Around the world, black handprints are appearing on doorways, scorched there by winged strangers who have crept through a slit in the sky.

In a dark and dusty shop, a devil’s supply of human teeth grows dangerously low.

And in the tangled lanes of Prague, a young art student is about to be caught up in a brutal otherwordly war.

Meet Karou. She fills her sketchbooks with monsters that may or may not be real, she’s prone to disappearing on mysterious “errands”, she speaks many languages – not all of them human – and her bright blue hair actually grows out of her head that color. Who is she? That is the question that haunts her, and she’s about to find out.

When beautiful, haunted Akiva fixes fiery eyes on her in an alley in Marrakesh, the result is blood and starlight, secrets unveiled, and a star-crossed love whose roots drink deep of a violent past. But will Karou live to regret learning the truth about herself?

This book inspired the post ‘When promising books go blegh‘, terrible drawing and all. So why on earth am I giving it a 4? I’ll tell you why.

The first third of the book was great. Then some crappy excuse for a romantic interest was forced into the equation. Literally, forced. I pushed myself through… I pushed… I tried to hold on. Others who had read it encouraged me that the book improved once Madrigal’s story started (and took over the deteriorating Karou one) and they were right. The last 100 pages had me so enthralled that when I finished, I was ready to buy the next book. I was ready to shove my money in the bookseller’s face. Take it! Take it! 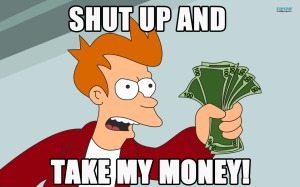 I was ready to give this story a 2 until the last chapters. Part of me wants to bring this rating down to a 3 because I feel tricked… manipulated… and a little used. But the last part was too good not to give it a 4. It actually got me excited and sitting on the edge of my seat. While I am willing to try the next book out, because the story finally restored my attention, I am still annoyed at how the story sagged so badly in the middle. For people who just want romance, and don’t care whether it feels natural or real, then it’s great the whole way through. But the forced romance part way through really pissed me off and nearly made me throw the book out the window.

Karou, our main character, was fun to follow for the most part. She was funny and cool. I liked Madrigal too, our other main, but I preferred Karou. She seemed much more edgy. I only liked Akiva at the end.

The world was well built. My favourite setting was Prague. I always love it when understated cities in fiction get a chance to shine. The races were well done. I’ve never been into the idea of chimaera, half human half animals, but it eventually grew on me. I really liked the idea of pain/teeth in exchange for wishes. I was worried the fallen angels theme was going to be too dramatic, and it was romanticised, but it wasn’t too much. I found it cool to hear the differing myths about how these two races came to being, one of my favourite parts of the book. I’ve never read a fallen angel story, so it hasn’t been overdone for me even though they saturate the market (or did for a period of time).

All in all, it was a good book. It had some memorable moments and I enjoyed the style. I was really angry at the middle, but I did stick through, and it paid off. It still feels like it could have been two different books (I think the author had some major writer’s block in the middle). I’ll let you all know how the second goes! Hopefully much more smoothly (with no bumps in the road).

Have you read the Daughter of Smoke & Bone? What did you think? Did the middle annoy you too?

This book is for you if you:

This book is not for you if you: