by Douglas Preston and Lincoln Child 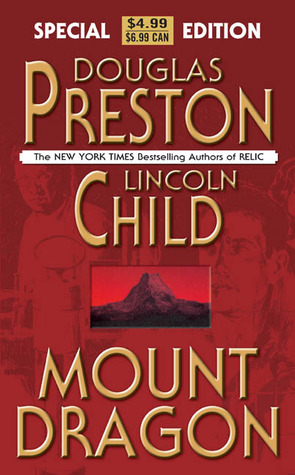 Mount Dragon: an enigmatic research complex hidden in the vast desert of New Mexico. Guy Carson and Susana Cabeza de Vaca have come to Mount Dragon to work shoulder to shoulder with some of the greatest scientific minds on the planet. Led by visionary genius Brent Scopes, their secret goal is a medical breakthrough that promises to bring incalculable benefits to the human race. But while Scopes believes he is leading the way to a new world order, he may in fact be opening the door to mass human extinction. And when Guy and Susana attempt to stop him they find themselves locked in a frightening battle with Scopes, his henchmen, and the apocalyptic nightmare that science has unleashed.

I’m still scratching my head trying to figure out the characters. Pretty sure Mount Dragon is supposed to be a suspense novel, but it just wasn’t. I’ll start there and come back to the characters.

For once, I’m not sure I can give a fair review without some spoilers. I strongly advise against reading Mount Dragon but if you insist and don’t want to be convinced otherwise, stop reading. If you enjoy suspense novels and want to know why this one fell flat, then this review is for you.

Unlike Inferno by Dan Brown, there’s no way this catastrophe could happen. Okay, so part of it, sure. The virus could accidentally get out or someone could unleash it. But there was a sub plot about a medicine with dangerous side effects being rolled out to live patients. There were so many problems with this sub plot, it was ridiculous. No one is going to believe the company, “oh it’s totally safe, we tried it on ourselves and we’re awesome. Use our product.” No. That’s not how it works no matter how many acknowledgements you put at the end of the book. Even if they were to get away without doing medical trials, which I doubt, there would need to be a study by an independent company. You don’t just give an untested medication to people.

Also, with the vaccine they are creating… seems to me there are two motives. 1. betterment of humanity. 2. money. After a while, we realize money is the motive behind the vaccine. Now I don’t know the science behind this next part but I just went with it and assumed it was true. The plot didn’t work anyway. So apparently this new vaccine is supposed to make humans immune to the flu. Awesome, I can accept that. According to the book, this immunization can happen one of two ways. It can either make one person immune and the next generation still needs to be immunized. Or it can change your DNA and get passed along to the next generation so that your kids are also immune. Do you see the problem yet? If the motive really is money, why would you want to make it so that your vaccine eventually gets spread through the population of the entire world (or close enough). Why purposely create a product that is not sustainable? You’d want to charge ever generation anew.

So that’s partially the character. He kept saying both motives, but money was obviously the end all be all motive. The words and actions just didn’t line up. As for Guy and Susana, someone is trying to kill you, there’s a threat that could unleash multiple plagues, kill loads of children, and possibly cause human extinction… what do you do? You stop in a cave to have sex and look for buried treasure. That seems logical. You’re not even infected with the brain altering drug. I swear it was just an opportunity to throw in an X rated scene.

2 out of 5 stars
-Eliabeth Hawthorne

Edit: Okay so someone please tell me how to see the notes on Goodreads before you publish a full review. I found this entered around the 90% mark: “We finally have a strong heroin with male sidekicks. The only problem is, she’s a complete idiot.”